This morning, I had something pop up in my Facebook newsfeed that annoyed me. Instead of responding to it on there, I figured it would make a great addition to my blog.

Here is what popped up: “If you believe in science, don’t go Paleo. Here’s the real reasons why.” 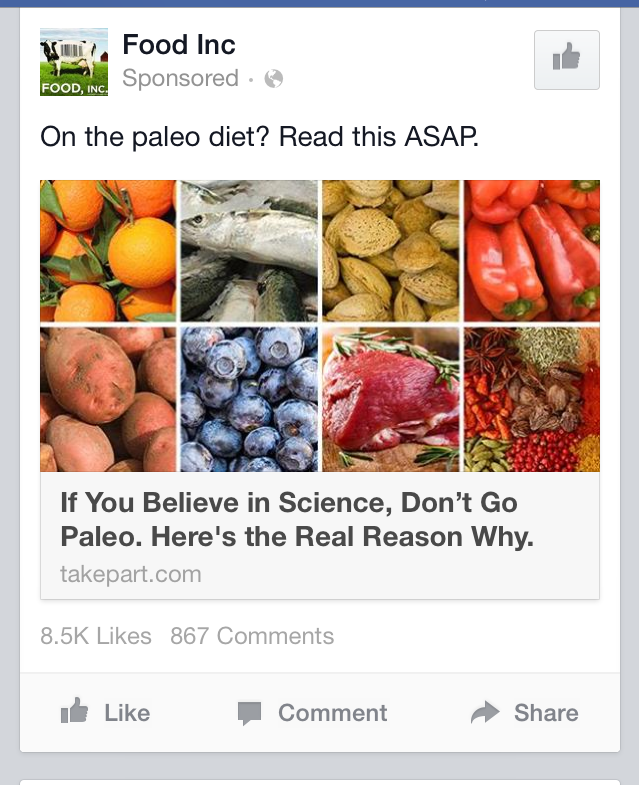 First, I do not eat Paleo. My family and I eat unprocessed foods, which are mostly in the original form you would have found them in the Paleolithic era. In two and a half years of eating as clean as possible, I have ran into an abundance of naysayers!

“Meat gives you cancer.”
“Eating meat is the equivalent of smoking a pack of cigarettes a day!” (my personal favorite!)
“This is not sustainable!” (hmmmm)
“You need the iron from grains.” (soooooo wrong!)

And now… “If you believe in Science, don’t go paleo!”

She points out that real cavemen would have eaten insects. Thanks. I will pass and take my chances. She babbles on about how uncredentialed the original founder of the “Paleo Diet” really is, because her PhD was actually in exercise physiology… while Jane has a degree in journalism.

What Jane so astutely left out is the fact that people have eliminated body aches, skin problems (like eczema, psoriasis, acne), had complete reversal of post partum depression, migraines, Tourette’s syndrome, high cholesterol problems, low blood pressure, vitamin/nutrient deficiency and everything related to being overweight… ALL by ONLY eliminating processed foods from their diet, including grains and poor quality dairy. I say all of this because these are the problems that MY family eliminated in just a few short weeks after removing this garbage from our diet. I suppose it could all be in our heads. That would require some amazing brain power!

Next, Jane says that she turned to an actual evolutionary biologist to get her take on going Paleo. This actual evolutionary biologist says that “you cannot assume (yes, she says assume) that it’s impossible for us to change. Sometimes evolution is slow, sometimes it’s fast, sometimes it’s in between.[…] The poster child for evolution in humans is dairy tolerance.” First, which is it? Have we evolved to be able to handle processed garbage fast, slow or somewhere in between? She doesn’t say. Yet, we are crazy for assuming there is a possibility we have not evolved to handle these things that could potentially be making us sick, fat and everything “in between”. Next, this actual evolutionary biologist (who has a book coming out against going Paleo. Shocker… $$$), points out that the fact that we tolerate (yes, she says tolerate) dairy is proof of quick evolution. Funny, because I can give you a list of people I personally know that do not tolerate dairy. Furthermore, just because you tolerate something does not mean that it is the OPTIMAL thing to put in your body. I could probably tolerate a line of cocaine…

To be clear, my family does eat dairy in moderation. To be even more clear, “I can’t believe it’s not butter” is NOT the dairy we eat.

Jane’s final point, after she uses the word “assume” a few more times, is that eating Paleo “can be construed as uncomfortably elitist,” because of the “expensive meat- especially if you hew to the only certified-organic and grass-fed caveat.” She even says that this expensive meat “means all of God’s children can’t come to the table.” Jane, my dear, let me show you my grocery bill. $125-150 a week to feed a family of five: breakfast, lunch and dinner! Let me show you my past dermatology bill with the expensive creams my husband had to use to treat his severe eczema (for years!), which vanished two weeks into eating unprocessed foods. Let me show you the medical bills from the doctors and allergists that poked and stuck needles in my one year olds back to try and determine what was causing his red, inflamed cheeks every single day. Come to find out, they found nothing and I took it upon myself to remove poor quality dairy (you know, the stuff we have evolved to ‘tolerate’) from his diet and his skin is perfect. Let me show you the expensive steroids they wanted to treat my teenage son with to help ‘control’ his severe tics, caused from Tourette’s. Guess what? He never took a single dose of those steroids and his tics are gone after we dropped processed foods from his diet. Let me show you the price of the medication my doctor wanted to prescribe for me, after the birth of my middle son, in order to treat post partum depression. Guess what? Every single symptom of my PPD disappeared a few weeks into removing processed food from my diet and never came back. Furthermore, I went on to give birth to my daughter a year later, while eating NO processed foods, and rocked my post partum recovery. I could go on and on, but you get my point, Jane.

I will not even touch the Carnegie Mellon “Greenhouse Effect” study that you closed your article with, because you clearly have 1) not read it 2) know nothing about what eating clean really means 3) must have horrendous gas from all the junk you put into your body, just like the grain-fed cows in the study.

I did learn something from Jane’s article. Eating unprocessed foods, as a key to health, was actually brought into light by gastroenterologist Walter Voegtlin in 1975. I want to get a copy of his book now. Thank you, Jane!

If you want to read the original post, here it is:
http://www.takepart.com/article/2013/01/30/jane-says-if-you-believe-science-dont-go-paleo